The exhibition included the workshop Database-Derive, an exploration into the concept of »Infrastructural Inversion« (Bowker/Star) and »Infrastructural Tourism« (Mattern). For the workshop the non-profit city-run exhibition space Galerie Wedding issued an invitation to participate. About ten people with diverse backgrounds, mostly art-affinicados, artists or students of related fields attended. After a 45 min introduction into the topical field, the idea was to walk around the Berlin streets and try to identify the visible ends of database systems. I had a few paper forms on pads prepared where participants could take notes. One was simply space for a hand drawn map, another recorded the general mood or spirit of the particular participant and another form allowed to record a list of our observations. Initially I had also prepared a coin, so we could throw coins, when deciding which direction we should take – inspired by the chance operations of John Cage. It turned out however, that in this particular street, the occurences of database signs were so dense, that after one-and-a-half hours we were still on that same street and decided to finish the walk in a cafe. The walk turned out to be inspiring since it produced new knowledge to which all participants contributed. It also fostered discussion amongst the participants. Some of them enjoyed the opportunity to discuss and interact, to experience the city differently and to acquire or share knowledge, but it also was questioned if what we were doing, could be called art. 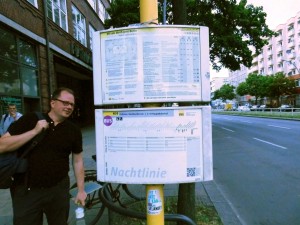 Bus Stop with schedule. Basically we assumed from common knowledge, that all the scheduling data is stored in the municipal transport services’ database. 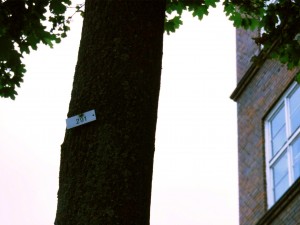 Tree with ID number. The ID indicates that this tree is recorded on file of the Berlin land-registry office. We assume that it is used to store information about the trees health status and calculate the environmental balance on that particular street. 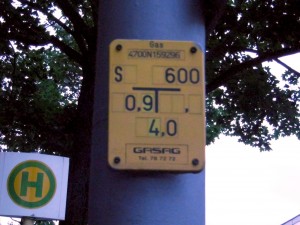 Gas pipe sign signals, where the gas pipe is to be found on the ground. The ID (11-digit number on top) implies that this location is stored in a file at GASAG, the local supplier. 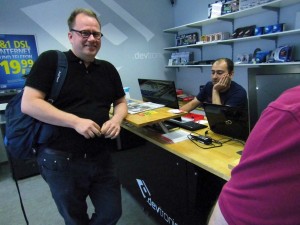 Computer Store – We asked the owner, which Enterprice Resource Planning System (ERP) he was using… 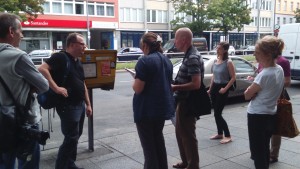 A participant explained, that inside each post box is a bar code to be scanned when the post box is emptied. The status of the emptied post box is then updated in a database and recorded for tracking reasons. 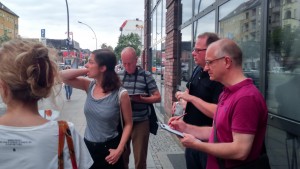