lecture at the Kulturen des Kuratorischen in May 2017 for the seminar »Leaking Bodies (and Machines)« by Julia Kurz and Anna Jehle. The session was joined by students of Peggy Buth who work about the topic of Big Data and Post-Internet art. 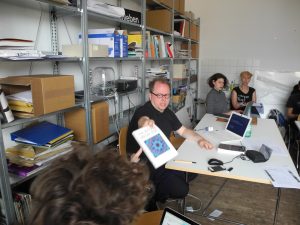 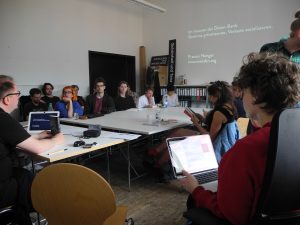 While the seminar was developed around reading Updating to Remain the Same: Habitual New Media (MIT Press) by Wendy Hui Kyong Chun, Francis Hunger was invited to add a more materialist perspective. Two lectures were delivered, the first developed a historical perspective on the development of computing technology in general and discussed relational databases in closer detail. It tried to give an overview about the state of art in computing technology and interconnect this with the social dimension of labor and cultural questions such as the crisis of the public/private and the cultural function of the archive. The second lecture introduced basic concepts regarding electronic infrastructure as developed by Bowker, Ruhleder and Star and ended with a discussion of data centers, the ideology of the »cloud«, and the function and meaning of data in »big data«. The following discussion evolved into a rather broad and general argument about how the mediocene emerged and influences current social relations.